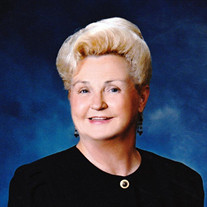 It is with deep sorrow that the Chapman family announces the death of their beloved mother, Chelsea Segars Chapman, 89. Mrs. Chapman, the widow of James William Chapman, entered into rest on Thursday, May 5, 2022. The Directors of Brown-Pennington-Atkins Funeral Home & Crematory are caring for the family. A graveside funeral service to honor her life will be held at 2 o'clock on Tuesday, May 10, 2022, at Magnolia Cemetery. The Rev. Steve Winburn will officiate, and the family will receive friends immediately following the service. Mrs. Chapman, the widow of James William Chapman, was born in Hartsville, SC. She was the daughter of the late Clarence L. Segars and the late Kathleen Matuse Segars. She was the middle child of her siblings; her older sister, the late Peggy S. Grantham; and younger brother, Cooper Lee Segars. She helped raise her younger brother as there were nine years between them in age. She was a hard worker, beginning as a teenager in retail working at the 5 & 10, Belk's, Coker's Department Store, as well as the Corner Drug Store. After the drug store closed, she worked as a bookkeeper at the Peoples Bank for many years until her retirement. She was very quick-witted and was lucky enough to stay that way throughout her life. She prided herself on a clean house and after she retired she began to work in the yards as well. She was a small in stature but a real spitfire. Very few dared to cross Chelsea. She was not a social butterfly but was fiercely loyal to her small inner circle. Family was very important to her and her first best friend in life was her older sister, Peggy. She didn’t open up to many outside of her family, so if you were one of the chosen few, you were indeed special and she was there for you through thick and thin. She is survived by her loving daughter, Melissa C. (Byron) Gainey of Charleston, SC; grandchildren, Seth R. (Bonnie) Gainey, and Dr. Paige G. (Austin) Nettles. The family would like to thank her friends and caregivers for helping her stay independent later in life.

It is with deep sorrow that the Chapman family announces the death of their beloved mother, Chelsea Segars Chapman, 89. Mrs. Chapman, the widow of James William Chapman, entered into rest on Thursday, May 5, 2022. The Directors of Brown-Pennington-Atkins... View Obituary & Service Information

The family of Mrs. Chelsea Segars Chapman created this Life Tributes page to make it easy to share your memories.

It is with deep sorrow that the Chapman family announces the...