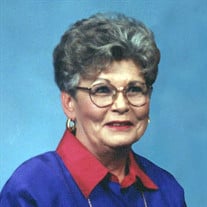 Funeral services for Mrs. Carter Stogner Hastings, 84, who entered into rest on Monday, February 3, 2020, will be held at 2 o'clock on Friday, February 7, 2020, in The Chapel of Brown-Pennington-Atkins Funeral Home. The Rev. Steve Winburn will officiate with burial to follow in Magnolia Cemetery. The family will receive friends from 5:00 until 7:00 pm on Thursday, February 6, 2020, at the funeral home. Memorials may be made in her honor to the American Cancer Society of the Pee Dee Region, 200 Center Point Circle, Suite 100 Columbia, SC 29210-1790. Brown-Pennington-Atkins Funeral Home is caring for the family. Born in Hartsville, SC, she was a daughter of the late L. B. Stogner, Jr. and Marcella Johnson Stogner. She was a big sports fan and had a love for Clemson football, and the Atlanta Braves, which were her favorite teams. She was a very competitive card player, and if she was playing Spades, you definitely wanted her to be on your team. She had a love for trips to the beach, laying in the sun, collecting seashells and sharks teeth. She was known to be a night-owl and was always up for a midnight trip to Walmart, Huddle House, or cruising to the beach just for the fun of it. She enjoyed traveling just about anywhere and never needed much time to pack - She was always ready to go! She was an expert at turning lemons into lemonade when life threw her curves. Her love for her family, her children, grandchildren, and great-grandchildren were most important to her. Her passion for her work, her customers, and her former students when she taught Cosmetology brought her so much joy. She enjoyed life, inspired countless numbers of people, and touched everyone that knew her with her smile, her heart, and her comb and scissors. She was a cheerleader, a teacher, a hairdresser, a Summer camp counselor, and a friend. A secret keeper, trustworthy traveling sidekick, a sister, an aunt, a mother, and on Father's Day she was a father too! She also was a loyal and long time member of the Brown-Pennington-Atkins Funeral Home family. If you looked in the dictionary for the words, "Legend" or "Special" you would find the name, Ms. Carter Hastings! She is survived by her loving daughters, Fran Hastings (Jimmy) Carter of Beulaville, NC, Beth Hastings (Marty Smith) Anhalt of Hartsville, SC, Joye Hastings Barilla (Brad) Kelly of Hartsville; brothers, L. B. Stogner III of Kiel, MS; sisters, Noma Stogner Rudisell of Hartsville, SC; grandchildren, Joseph Kelly, Caleb (Amber) Hastings, Kayleigh Tyner, Katie Anhalt, Gavin Barilla, Garrett Barilla, Izzie Barilla; great-grandchild, Wrenlee Hastings. In addition to her parents, she was preceded in death by her daughter, Kelly Hastings; sister, Marcia Stogner Hawkins; and her son-in-law, Eddie Anhalt. Serving as pallbearers will be Lawrence Hope, Butch Rudisell, Caleb Hastings, Spencer Prince, and Kevin Woods, and honorary pallbearer, Garrett Barilla, who is currently serving his country in the US Army in Basic Training.

Funeral services for Mrs. Carter Stogner Hastings, 84, who entered into rest on Monday, February 3, 2020, will be held at 2 o'clock on Friday, February 7, 2020, in The Chapel of Brown-Pennington-Atkins Funeral Home. The Rev. Steve Winburn will... View Obituary & Service Information

The family of Mrs. Carter Stogner Hastings created this Life Tributes page to make it easy to share your memories.