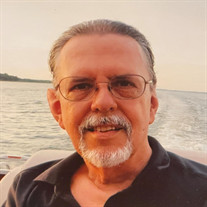 It is with deep sadness that Mrs. Joann Wurzbacher announces the death of her beloved husband, Carl Theodore “Ted” Wurzbacher, 79 Mr. Wurzbacher passed away peacefully at his home on, Friday, September 3, 2021. A celebration of his life will be held at 1 o'clock on Monday, November 23, 2021, in The Prayer Garden of First Presbyterian Church. The Rev. Ashley Cheek will officiate and Brown-Pennington-Atkins Funeral Directors are caring for the family. Ted was born on August 23, 1942, in Lawrence, MA. He was the son of the late Carl Theodore Wurzbacher, Sr., and Mildred Higgenbothem Wurzbacher. Ted was "compassionate love" personified, with a quiet tenderness that touched the hearts of every person he met. He was a loving father, a devoted husband, and adored by his three feline fur babies. He was patient and kind, with a quick wit and a deep intellect. He had an affinity for Civil War history and folklore, stamp and coin collecting, watching sports and playing golf, and was always the fan of a good romantic comedy and food of any kind. Ted was a veteran, serving in the United States Navy as an Aviation Shopkeeper from 1963 to 1967 when he received an honorable discharge and pursued a Master’s degree in Human Resources. He eventually moved with his family to Hartsville, South Carolina in June 1995 where he loved his work as a Human Resources specialist for Care-South Carolina in Hartsville. He was adored by his coworkers for his steadfast dedication to his team, his impeccable work ethic, and his dry wit. Ted was an active member of the First Presbyterian Church of Hartsville, where he was a tenor in the Chancel Choir and also served as a church elder, and Stephen Minister. His devotion to the Word of God and the Teachings of Jesus Christ were the driving forces in every aspect of his life. He is survived by his loving wife, Joann; daughter, Ashly (Stan); stepsons, Kevin (Tina), Kenny (Miranda), and Derek; sister, Karen (Fred); four grandchildren, Logan, Brianna, Natalie, and Kinley. The world is not a lesser place because he’s gone but in fact a better place because he lived.

It is with deep sadness that Mrs. Joann Wurzbacher announces the death of her beloved husband, Carl Theodore &#8220;Ted&#8221; Wurzbacher, 79 Mr. Wurzbacher passed away peacefully at his home on, Friday, September 3, 2021. A celebration of... View Obituary & Service Information

The family of Mr. Carl Theodore “Ted” Wurzbacher created this Life Tributes page to make it easy to share your memories.

It is with deep sadness that Mrs. Joann Wurzbacher announces...