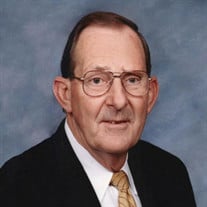 It is with deep sorrow that the McBride family announces the death of their beloved father, C Gordon McBride, 87, of Hartsville, SC. Mr. McBride passed away peacefully on Tuesday, December 14, 2021. A private funeral service to honor and celebrate his life will be held at First Presbyterian Church. The Rev. Ashley Cheek and The Rev. Dr. Dan Sansbury will officiate and the burial will also be private. Brown-Pennington-Atkins Funeral Directors are caring for the family. Born June 2, 1934, in Rochester, Michigan, to the late Clifford James McBride and Anice Gonyou McBride. He is the widower of his longtime wife, Bernice Rogers McBride. He graduated from the University of South Carolina with a degree in Engineering then went into the United States Navy. After his military service, he went to law school at the George Washington School of Law at American University in Washington, DC. Upon graduating from law school, he took a job as a patent advisor for the National Aeronautics and Space Administration. When he left NASA, he came back to start his private law practice in Columbia, SC, where he practiced mainly intellectual property law. After several years in Columbia, he moved to Hartsville and took a job with SONOCO products in their engineering department doing patent, copywrite, and trademark work for the company. When he left SONOCO, he went back into the private practice of law. During his private practice, he served as Darlington County Attorney; he was a Public Defender; he represented the Hartsville Housing Authority; he was an Administrative Law Judge for the S.C. Public Service Commission and presided over utility rate hearings all over the State of South Carolina. As an Attorney, Mr. McBride was licensed in the State Courts of South Carolina and Florida. He was also admitted to the Federal District Court in South Carolina, the United States Court of Appeals for the Fourth Circuit in Richmond, Virginia, and the United States Court of Customs and Patent Appeals. He was also a member of the American Bar Association, the S.C. Bar Association, and the Darlington County Bar Association. As a Darlington County Bar Association member, he also served a term as its President. He was also instrumental in starting and serving as the first Executive Director of Legal Services on the Fourth Judicial Circuit. He started the program to bring free legal assistance to low-income residents of Chesterfield, Darlington, Dillon, and Marlboro Counties. In 1988, he was elected Solicitor of the Fourth Judicial Circuit, where he spent two terms as the head prosecutor in criminal cases in Darlington, Dillon Chesterfield, and Marlboro Counties. While Solicitor, he was also elected as President of the South Carolina Solicitor’s Association in 1996. After his terms as Solicitor, he went back into private practice. While living in Hartsville and raising his family, Mr. McBride was also active in the community. He was a longtime member of First Presbyterian Church in Hartsville, where he served his church as a Deacon, Elder, and Trustee. He was active on numerous church committees and active on numerous projects over the years. He also served as a Troop Committee Member for Boy Scout Troop 512 sponsored by the church. He was a Master Mason and served as Master of Masonic Lodge #173 in Hartsville. He was also a Shriner in OMAR Temple, was a member and President of the Darlington County Red Fez Club in 1987. He was also a member of the Jolly Jeepsters. While active in OMAR Temple, he served as OMAR Temple Attorney for several Potentates. While in private practice, he was also an adjunct professor at Florence Darlington Technical College, where he taught private security and State Constable, classes. He was also on the S.C. Attorney General’s Private Security Task Force. After retirement from the practice of law, Gordon served a number of years as a member of the Service Core of Retired Executives (SCORE). Gordon served on the Darlington County Economic Development Board and “Forward Darlington County.” He served a term as the Darlington County Economic Development Director. He was named State of S.C. Ambassador for Economic Development in 2006 by Governor Mark Sanford for his “Outstanding Commitment to Economic Development.” He was a longtime member of the Hartsville Rotary Club. Served as Club President and was Paul Harris Fellow. He and his wife Bernice represented the Club at the Internal Rotary Convention in Copenhagen, Denmark. He and his wife were loyal supporters of Coker University and Kalmia Gardens financially and by attending activities and events. He also chaired the “Hartsville Community Campaign for Coker” one year. His other civic activities included: Member of The Pee Dee Red Cross Board and served as Chairperson. Member of The Pee Dee Mental Health Board. Member of The Pee Dee Land Trust Board and served as Chairperson. Member of the Greater Hartsville Chamber of Commerce Board and served as Chairperson. Member of the Hartsville United Way Board and served as Chairperson. Member of the Hartsville Red Fox Booster Club and served as President. For his many of the activities, accomplishments, and the ways he served his community and state, Gordon McBride was named “Citizen of the Year” by the Hartsville Rotary Club in 2009. He is survived by his three sons Clifford Carlisle McBride of Florence, SC; Roger Bruce McBride of Hartsville, SC; and Burns Gordon McBride of Florence, SC. His brother James Arthur McBride of Land O’Lakes, Florida. His granddaughter Jessica McBride Thompson (Jeremy) and great-granddaughter Elsie Ann Thompson of Concord, NC. He is also survived by numerous nieces and nephews. Memorials can be made to First Presbyterian Church in Hartsville or any of the non-profits or organizations mentioned above that meant so much to him.

It is with deep sorrow that the McBride family announces the death of their beloved father, C Gordon McBride, 87, of Hartsville, SC. Mr. McBride passed away peacefully on Tuesday, December 14, 2021. A private funeral service to honor and celebrate... View Obituary & Service Information

The family of Mr. C Gordon McBride created this Life Tributes page to make it easy to share your memories.

It is with deep sorrow that the McBride family announces the...