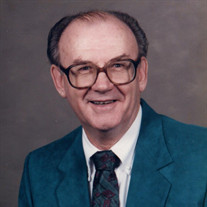 Bryan Livingston Blackwell went home to meet his Lord and Savior on Wednesday, April 13, 2022 in Florence, SC at 96 years of age. Born in Hartsville, South Carolina on June 25, 1925, he was the son of Barney Edward Blackwell and Maggie Lee Rogers Blackwell, as well as Anna Jane Berry Blackwell, who became his mother at the age of three after Maggie died. He was forever grateful to Anna Jane for becoming his mother. Bryan was a graduate of Hartsville High School, class of 1942, and a graduate of Davidson College, class of 1947, with a BS in Economics. While at Davidson, he studied voice with Earl Berg and Dr. James Christian Pfohl, the founder of Brevard Music Center. There he was a member of Pi Kappa Phi Fraternity and Phi Mu Alpha Sinfonia Music Fraternity. Bryan built his career as a rural mail carrier with the United States Postal Service on Route 4 and as choir director for Sardis Baptist Church (Timmonsville, SC) and Swift Creek Baptist Church. He also served as tenor soloist for performances of Handel’s Messiah throughout the region. Additionally, Bryan was a highly respected soloist for weddings and funerals. A lifelong lover of music and an accomplished operatic tenor, Bryan began his musical career with the First Baptist Church Choir of Hartsville. He went on to sing with the Davidson College Glee Club and as a featured soloist on local radio stations WJMX in Florence and WHSC in Hartsville with his own weekly programs. He appeared as Bob in the opera The Old Maid and the Thief at Coker College. Other musical highlights include being one of eight members of the prestigious Montreat Presbyterian Conference Center Choir under the direction of Dr. Austin C. Lovelace and working as a music counselor at the Brevard Music Center (Brevard, NC) in the 1940s. Bryan began dating the love of his life Martha Ann Anderson Blackwell, a student at Coker College, while singing at a Boy Scout banquet, when he asked Martha Ann to be his accompanist. This led to a proposal at Prestwood Country Club, and the two were married on September 2, 1950. For over 71 years of marriage they were inseparable and were a devoted, loving couple. A devout Christian, Bryan was an upstanding member of the Hartsville community. He led Sunday School Opening Assembly music at First Baptist Church and was a member of the Men’s Sunday School Class. In his later years, he and Martha Ann also attended worship service at First Presbyterian, Hartsville. Bryan was a member of Civitan International being named Hartsville Civitan of the Year (1996 - 1997), Outstanding Carrier of the Year by the South Carolina Rural Letter Carriers’ Association (1984), and Treasurer of the South Carolina Association of Music Clubs for 22 years. He was proud to be a Life Member of the National Federation of Music Clubs. He was recognized by the South Carolina Federation of Music Clubs in 1984 for his many years of service. In his earlier years, he attended many state and national Rural Letter Carrier Conventions. Bryan loved pulling for the Hartsville Red Foxes, Davidson Wildcats, Duke Blue Devils, and San Francisco Giants. He enjoyed watching baseball, basketball, and football on TV, while cheering his teams on throughout the regular and postseason play. He loved reading and was a student of history as well as family genealogy and sports trivia. Bryan could be found most of the time working in his yard until age 92 riding his lawn mower, pulling weeds, and growing tomatoes. He liked dogs and cats, feeding songbirds, playing with his children and grandchildren during their childhoods, and valued spending time with his family. Bryan had a great sense of direction and knew how to navigate anywhere before a GPS and smartphone were invented. He will be remembered for being honest, kind, and having moral integrity. Bryan deeply loved his children, Joan and Barry and relished taking his family on trips to see the beauty and majesty of America. Before his passing, Bryan traveled to 46 of the 50 states and also took vacations to Canada and Mexico. He had a deep appreciation for the Western landscape, especially Yellowstone, Grand Canyon, Bryce, and Zion National Parks. He loved the Blue Ridge Mountains and annual family vacations to Sunset Beach, NC. He and Martha Ann’s golden years were spent traveling to National Federation of Music Clubs Conventions throughout the USA. One of Bryan’s greatest joys in life was becoming a grandfather. He was a doting grandparent to his grandchildren Kimberly and Brent and with them he shared his love of music and history through summer trips to American historical sites. He is survived by his wife of 71 years Martha Ann Anderson Blackwell; daughter, Joan Blackwell Hoover (Gary) of Aiken, SC; son, Barry Anderson Blackwell of Charlotte, NC; granddaughter, Kimberly Michelle Hoover of Aiken, SC; and grandson, Brent Michael Hoover of Aiken, SC, as well as several beloved nieces and nephews. In addition to being predeceased by his parents, he was predeceased by brothers, Lester Blackwell, Alton Blackwell; and sisters, Miriam Blackwell Myers and Martha Blackwell Martin. He was also predeceased by older brothers Cecil Blackwell and Barney E. Blackwell, Jr. who died in early childhood. Bryan was the last living member of his siblings. Thank you to the many wonderful individuals who cared for Bryan at Southland Healthcare Center over the last two years. Visitation will be held from 3:00 p.m. to 5:00 p.m. at Brown-Pennington-Atkins Funeral Home on Friday, April 15, 2022. A Service to the Witness of the Resurrection will be held on Saturday, April 16, 2022 at 3:00 p.m. to celebrate Bryan’s life at First Presbyterian Church Hartsville. In memory of Bryan, please make a contribution to the Virgil and Alice Smith Music Scholarship at Coker College or a charity of one’s choice. The Directors of Brown-Pennington-Atkins Funeral Home & Crematory are caring for the family.

Bryan Livingston Blackwell went home to meet his Lord and Savior on Wednesday, April 13, 2022 in Florence, SC at 96 years of age. Born in Hartsville, South Carolina on June 25, 1925, he was the son of Barney Edward Blackwell and Maggie Lee... View Obituary & Service Information

The family of Mr. Bryan Livingston Blackwell created this Life Tributes page to make it easy to share your memories.