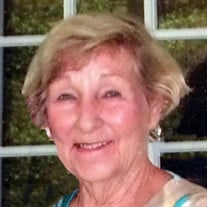 Betty Couch Saul entered eternal rest on January 8, 2021. She was born in Joanna, South Carolina to the parents of Charles Winfred and Pearl McCurry Taylor on August 1, 1932. Betty grew up in Ware Shoals, South Carolina where she met and married her husband, Charles Wilbert Couch. Betty and Wib moved to Bishopville in 1959 where she met so many life-long friends. In Bishopville, Betty was introduced to the game of golf, which she enjoyed her entire life. She embraced this small community. She worked as the Advertising Manager for the Lee County Observer for many years enjoying many hours meeting and talking to all the merchants in the downtown area. She later worked in the Tax Assessor’s Office at the Lee County Court House. Because she loved working and being around people, so later she decided to go back to work part-time for Jeff Varn as an assistant. Betty loved life, family, playing golf, learning to play bridge, and fun nights of penny poker with best friends. Betty and Wib bought a place at Lake Wateree in the 1970s. Lake Wateree quickly became her favorite spot. Spending weekends there with family and friends brought so much joy to her life. Even up until her last few months, going to visit her children at Wateree became the highlight of her days. After Wib’s passing in 1994, she was fortunate enough to meet Jim Saul, whom she later married. They also shared many happy times at Wateree. She was blessed to have married two wonderful men who brought so much happiness to her life. Betty cherished many things in her life, but her family was her greatest treasure. She loved family gatherings – birthdays, holidays, reunions, and family vacations. She planned great family vacations for her children and grandchildren. Her grandchildren were so special to her. Betty’s time with grandchildren and the great children were the best times in her life. Her love for them has created a treasure of life-long memories of a grandmother’s love. Betty is survived by three children: Charles W. Couch, Jr. (Lisa), Polly C. Mimms, and Terry McCown (Mark); eight grandchildren: Jennifer Stoddard (Hugh), Paige Rostin (Mike), Charlie Mimms (Melissa), Player Mimms (Brittany), Graham Couch (Kathryn), Joseph McCown, Chandler Jackson (Tyler), and Spencer McCown. She is also survived by 7 great-grandchildren: Anna and Toland Stoddard, Margaret and Marion Mimms, Charlotte Couch, Connelly Jackson, Saunders and McCrae Rostin. She also leaves behind a loving brother and sister, Chuck Taylor and Shelby Jenkins. Betty was predeceased by her first husband, Charles W. Couch, and late husband, James Saul. She was predeceased by two loving sisters, Opal Elgin and Juanita Hughes. A private graveside service for family only will be held Monday, January 11 at 11:00 am. Memorials can be sent to St. Luke Methodist Church, PO Box 308, Lynchburg, SC 29080.

Betty Couch Saul entered eternal rest on January 8, 2021. She was born in Joanna, South Carolina to the parents of Charles Winfred and Pearl McCurry Taylor on August 1, 1932. Betty grew up in Ware Shoals, South Carolina where she met and married... View Obituary & Service Information

The family of Mrs. Betty Couch Saul created this Life Tributes page to make it easy to share your memories.