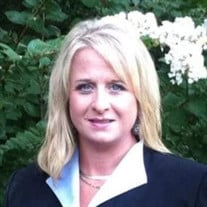 A graveside funeral service for Mrs. April Hall Johnson, 49, who entered into rest on Thursday, December 24, 2020, will be held at 1 o'clock on Monday, December 28, 2020, in Philadelphia Southern Methodist Church Cemetery. The Rev. Wayne Parker will officiate and the family will receive friends following the service. Brown-Pennington-Atkins Funeral Directors are caring for the family. Born in Hartsville, SC, she was the first-born to Loyal "Pedro" Hall and Dianne Parker Hall. She graduated from Hartsville High in 1989 and was very musically talented. She played the sax as a member of the Red Regime and enjoyed singing and performing as a hobby. She was also an avid lover of animals and nurtured several pets in her life. She was a protective older sister. April later married the love of her life, Chris Johnson and before she had children of her own, April was a loving aunt to her nieces and nephews. After many years of trial and loss to become a mother, her dream came true in 2005 when she had her twins. She was a very involved mother. April was always attending sporting events and spending time with her kids. She felt that her greatest accomplishment in life was her children. She is survived by her former spouse, Chris Johnson of Timmonsville, SC; twins, Emily Johnson and Walker Johnson both of Timmonsville, parents, Loyal "Pedro" Hall and Dianne Parker Hall of Hartsville; brother, Ramey (Prudence) Hall of Hartsville, SC; sister, Nicole Loving of Hartsville, SC; aunts and uncles, Charles Parker of Hartsville, SC, Crystal and J. B. Jones of Hartsville, SC, Jean Sarsain of Hartsville, SC, Carolyn Mollo of Hartsville, SC; nieces and nephews, Hailey Hall, Brooklyn Loving, Dylan Hall, Garrett Loving, Sydney Brown; cousins who were like siblings, Chad James of Moyock, NC, Christy Weatherford of Chesapeake, VA, and James Parker of Hartsville, SC. She was preceded in death by her aunts and uncles, Mazalee Vaughn, Brenda Parker, Delmus Hall; nephew, Cole Loving; paternal grandparents, Creighton and Eula Mae Hall; maternal grandparents, Lamar and Ruby Parker.

The family of Mrs. April Hall Johnson created this Life Tributes page to make it easy to share your memories.