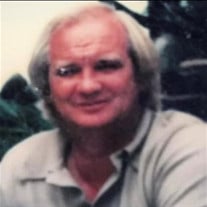 A private family funeral service for The Hon. Alston Wesley "Rounder" Woodham, II, 82, who entered into rest on Saturday, January 2, 2021, will be held. In lieu of flowers, memorials may be made in his honor to the Robert E. Moore Jr. Scholarship... View Obituary & Service Information

The family of The Hon. Alston Wesley "Rounder" Woodham II created this Life Tributes page to make it easy to share your memories.