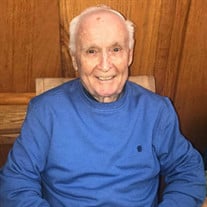 Funeral services for Mr. Allen Barr “Robbie” Roberts, Jr., 87, will be held at 2:00 p.m. on Monday, February 1, 2021 in the Chapel of Brown-Pennington-Atkins Funeral Home. The Rev. Joey Colson will officiate with burial to follow in Magnolia Cemetery. The family will receive friends one hour prior to the service. Those attending should wear a mask and practice social distancing. Mr. Roberts entered into rest on Thursday, January 28, 2021. Allen "Robbie" was born on July 10, 1933, in Chester, PA to the late Allen Barr Roberts Sr. and the late Rena Baker Roberts. He graduated from Wildwood High School in 1951 and immediately enlisted in the United States Air Force where he served in the Korean War. When he returned from Korea, he was stationed at Shaw Air Force Base in Sumter, SC. After being discharged from the military, he met the love of his life, Mary Northcutt and was married for 55 years before she preceded him in death on January 31, 2010. He and his wife, Mary, lived in Ft. Lauderdale, FL for 54 years before returning to Hartsville in 2010 to be closer to family. Allen "Robbie" was an avid sportsman, loved watching the Miami Dolphins and enjoyed playing handball, golf and exercising. He loved to travel and was able was to take a 6 month trip in 2011 with his brother, George, out west and Alaska visiting national parks, dog sledding, panning for gold, zip-lining and hot air balloon ride along with other adventures. He enjoyed spending time with family and in his later years playing Rummikub several nights a week. He loved his dog, Zeke, dearly and is now reunited with him again along with his wife, Mary. He was very passionate about education and encouraged young adults to further their education. He created The Roberts Family College Scholarship Fund to help high school seniors begin their college careers. He attended Emmanuel Baptist Church and was a member of The Living Hope Men’s Sunday School Class. Allen "Robbie" was also a very hard worker and started his career working from the ground up. He never stopped furthering his education resulting in becoming a successful business administrator. While employed as the Director of the Utilities and Water Works for the City of Fort Lauderdale, Fl, he completed his Master's Degree In Business Administration from the University of Miami. He earned multiple awards from the American Water Works Association to include the Man of the Year Florida Section (1986), The George Warren Fuller Award (1991), and 50 Gold Water Drop Award for 50 years of service (1960-2010). He served in several positions within the American Water Works Association as Trustee (1979-82), Secretary-Treasurer (1986-87), Chairman (1988-89), Local Arrangements Chairman of the AWWA and FPCA (1988), Board of Directors Member (1993-96), International Director Florida Section (1993-96). After retiring from the City of Ft Lauderdale, he served as President of the American Water Works Association for 6 years. Memorials can be made to the Darlington County Humane Society, P.O. Box 1655, Hartsville, SC 29551 or the American Cancer Society online at https://donate3.cancer.org/ He was preceded in death by his wife of 55 years, Mary Northcutt Roberts. Surviving are his brother, George E. Roberts, Sr. of Palm Coast, FL; nieces, Linda "Lynn" N. Smith of Hartsville, SC, Deborah (Doug) Armstrong of Cullowhee, NC, Charlene (Roger) Herring of Ridgeway, SC, Patti N. Harris of Wilmington, NC, Denise (Gregg) Dippolito of West Deptford, NJ, Jill (Tom) Salvaino of Collinsville, NJ, Kimberly English and James Lafferty, Jr. of Collinswood, NJ, Denny (Joe) D'Amelio of Blackwood, NJ, Cheryl (Bruce) Needhammer of Kansas City, MO; nephews, Mike (Brenda) Northcutt of Hartsville, SC, George E. Roberts, Jr. of Palm Coast, FL, Timothy Roberts of Sicklerville, NJ.

Funeral services for Mr. Allen Barr &#8220;Robbie&#8221; Roberts, Jr., 87, will be held at 2:00 p.m. on Monday, February 1, 2021 in the Chapel of Brown-Pennington-Atkins Funeral Home. The Rev. Joey Colson will officiate with burial to follow... View Obituary & Service Information

The family of Mr. Allen Barr “Robbie” Roberts Jr. created this Life Tributes page to make it easy to share your memories.