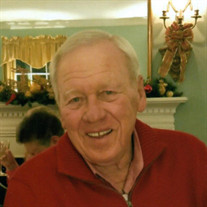 Funeral services for Mr. Alan Karl "Al" Borkenhagen, 80, who entered into rest on Wednesday, September 16, 2020, will be held at 1 o'clock on Saturday, September 26, 2020, in The Chapel of Brown-Pennington-Atkins Funeral Home, with Father Dan Papineau officiating. The family will have a "19th hole" visitation at their home from 3:00 until 5:00 PM on Saturday, 1212 Salem Road, Hartsville, SC. Brown-Pennington-Atkins Funeral Directors are caring for the family. In lieu of flowers, memorials may be made in his honor to the American Cancer Society, 200 Center Point Circle, Suite 100, Columbia, SC 29210-1790. Born in Milwaukee, WI, he was a son of the late Edward and Esther Dey Borkenhagen. Al, a native of Milwaukee, Wisconsin, attended Michigan State University and graduated with a degree in Packaging Science. He was a member of Theta Chi fraternity and the Army ROTC. Al started his professional career at Dupont, then American Can Company. In the early 70's, Al and his wife Angie moved to Hartsville, where he started his 27-year career at Sonoco. Al quickly became a staple in the Hartville Country Club Pro Shop, and for 46 years, he played countless rounds and made so many close friends while chasing a little white ball. Al loved to help friends and, although he wasn't a member of St Mary's, he gladly volunteered and cooked for the annual fish fry. In 2009, Al began a second career as the Hartsville High School Girls and Boys' Golf Coach, where he earned numerous awards, including the SC AAA Boys Coach of the Year in 2011, 2014, and 2015. As a golf instructor, Coach Al was able to touch many lives and will be missed by his many students. Al was proud of his students but was more proud of his wife, daughter, and grandson. He loved all of his family very much. He is survived by his loving wife, Angela Borkenhagen of Hartsville, SC; daughter, Tracy Salak of Greenville, SC; brother, John (Eileen) Borkenhagen of Whitehall, PA; sister-in-law, Donella Borkenhagen of Surprise, AZ; grandchildren, Ben Salak of Greenville, SC; many nieces and nephews. He was preceded in death by his brother, Keith Borkenhagen.

Funeral services for Mr. Alan Karl "Al" Borkenhagen, 80, who entered into rest on Wednesday, September 16, 2020, will be held at 1 o'clock on Saturday, September 26, 2020, in The Chapel of Brown-Pennington-Atkins Funeral Home, with Father Dan... View Obituary & Service Information

The family of Mr. Alan "Al" Karl Borkenhagen created this Life Tributes page to make it easy to share your memories.